In the two years I spent in India, I did my best to avoid becoming re-acquainted with Indian TV. From interminably boring soap operas and reality shows to horrendously banal “breaking news”, and “music channels” that play the same three songs on an endless loop, it was mostly bad. The only tiny little ray of sunshine on this dark horizon was was Zindagi – a new channel that telecast Pakistani series. I have very fond memories of old Pakistani TV series and was delighted to see some new ones. (They’re not a patch on my favourite dramas of yore, but that is a gripe for another day.) Today, I want to talk about one of the few new Pakistani series that I liked quite a lot. Zindagi Gulzar Hai is an interesting romantic series starring the oh-so-good-looking Fawad Khan (yes, I admit that that was my main motivation for watching!). It is very well made, with a strong female character, lots of believable drama and a happily-ever-after end. It does have some major flaws (more on that later) but on the whole, it is a lovely series and, more importantly, way better than anything else I saw on Indian TV. 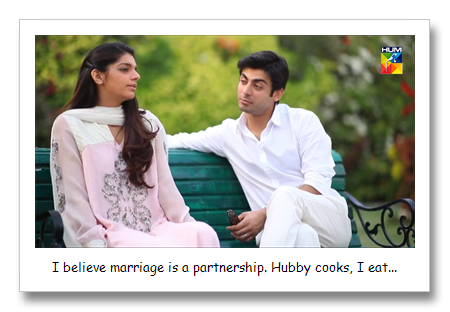 The story traces the lives of two very different people. The first is Kashaf Murtaza (Sanam Saeed) a conservative, lower middle class girl struggling to complete her education. The second is Zaroon Junaid (Fawad Khan), the scion of a wealthy, upper class business family. These two very different people meet up at university, fight and dislike each other, go their separate ways, meet again and start an unlikely relationship. Interwoven with this are the stories of their families and their ups and downs. Like classic PTV dramas, this one starts out slowly, giving us time to get acquainted with the characters. The story gradually builds up and draws you in. And when the end comes, you wonder why it couldn’t go on longer! 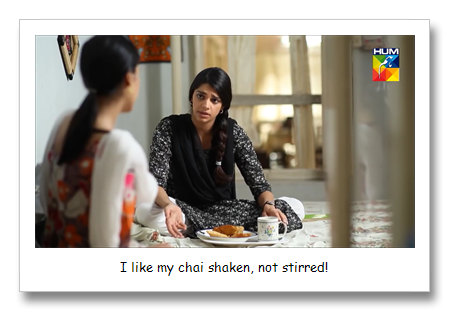 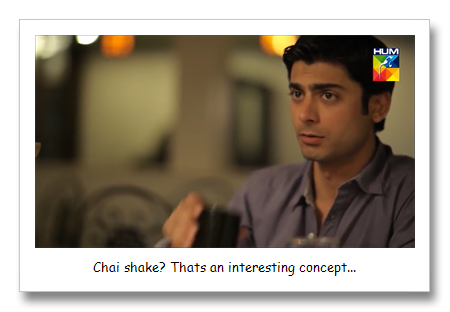 Kashaf is the eldest of three sisters, all intelligent and hard working young women, trying to get through college and school. Their mother, Rafia (Sameena Peerzada) is the principal of a school, but her salary is not enough to pay the bills. So the older girls – Kashaf and Sidra (Mansha Pasha) – tutor students in their free time to ease the financial burden. Their father, Mohammed Murtaza (Waseem Abbas), lives with his second wife Nigar (Shazia Afghan) separately. He likes to play the patriarch to Rafia and his three daughters, but has effectively abandoned them. It emerges that he remarried in order to have a son, and is happy with his second wife and their three children. Of the abandoned daughters, Kashaf, his first-born child, feels his rejection most deeply, and resents him most strongly. The fact that he does not help them financially, and more often than not, belittles their struggle to better themselves, just adds fuel to her anger. Her deep anger against her father and her own feeling of inferiority through being abandoned by him, shape her character and her perspective on life. She is always angry and has a perpetual chip on her shoulder about not being lovable enough, pretty enough or rich enough. 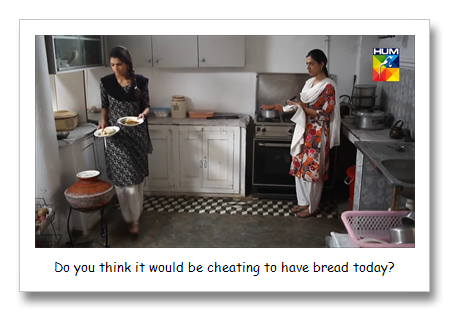 Zaroon comes from the other end of the social spectrum. His father, Junaid (Javed Shaikh) is a rich businessman, his mother Ghazala (Hina Khwaja Bayat) is a career woman (you never get to know what career, exactly, but it involves lots of international travel and urgent meetings that take her away from home all the time). They live in a huge, luxurious mansion, and none of them ever seems to soil their hands with housework. Zaroon drives to college in a Mercedes. Both he and his sister, Sara (Ayesha Omar) live in the lap of luxury and seem to be a very loving, happy and prosperous family. But this is soon seen to be a facade. Ghazala is very busy with her career and Junaid resents not having a stay-at-home wife who is “there for him” all the time. Zaroon too, resents his mother’s career. (Naturally, a woman’s first duty is to minister to her husband and son!) And Sara is a very spoilt and inconsiderate person who is unable to adjust in a relationship. (It all comes of being modern – women start wearing western clothes, hanging out with friends of the opposite sex and become incredibly selfish!) 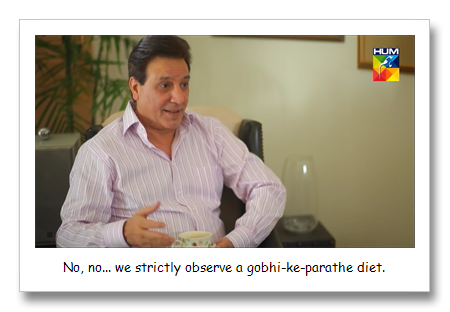 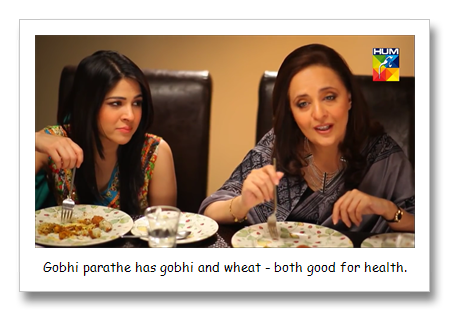 When the story begins, both Kashaf and Zaroon have been accepted in the masters program at an elite business school in Karachi. Kashaf, as usual, has come first and will get a scholarship that will help her financially. Zaroon, who is miffed at losing out on the first position, is overheard saying, “Kashaf Murtaza must be a chudail (witch)”. That remark, and his entitled attitude, fix him in Kashaf’s mind as a spoilt, upper-class, twit. On the first day of class, when he civilly introduces himself to Kashaf, she retorts that her name is “Chudail”. The battle lines are drawn and nothing over the next two years occurs to change their mutual antipathy.

A college story cannot be complete without a gang of friends! While Kashaf stubbornly refuses to socialise much with her classmates, Zaroon has his “gang” of friends – Osama (Sheheryar Munawar Siddiqui) and Asmara (Mehreen Raheel) – both rich kids who tend to agree with Zaroon’s assessment of Kashaf. But as time goes by, Osama comes to admire Kashaf’s intelligence and appreciate how often she leaves Zaroon speechless with rage. Asmara’s dislike, however, increases with every point Kashaf scores over Zaroon!

Kashaf routinely outscores Zaroon in tests and assignments and defeats him in classroom arguments. And their teacher, Abrar (Behroze Sabzwari) – who happens to be Zaroon’s father’s friend – also considers Kashaf his best student. Zaroon is not used to being outsmarted, especially by a mere girl, and takes it very personally. But all this would be forgiven if Kashaf would only have the decency to appreciate his manly charms. Sadly, she appears quite impervious. So when Maria (Maheen Rizvi) – Kashaf’s one friend in class – tells Zaroon that there is no way Kashaf will ever fall for him, Zaroon immediately decides that he will make her fall for him and humiliate her. (Charming guy, isn’t he?) 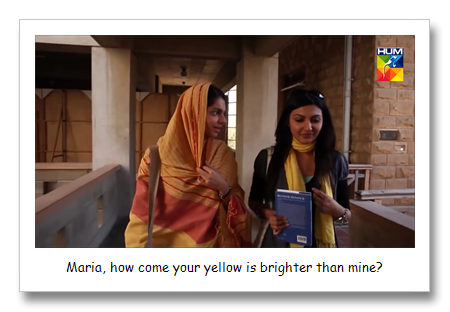 The self-appointed Prince Charming then embarks on Operation Charm Kashaf. He spends several weeks showering her with attention that she clearly does not want, and gifts that she spurns. He even apologises for offending her – all to no avail. Kashaf is convinced that he is playing games with her and is determined not to give in. Asmara isn’t best pleased to see Zaroon expending all his time and attention over someone else, but she does not really have much control over Zaroon’s actions. Things come to a head when Kashaf accidently overhears Zaroon’s plans to make her fall for him and humiliate her. That Zaroon hasn’t succeeded and will not succeed, has no bearing on her sense of humiliation. She angrily confronts Zaroon and he, unable to defend the indefensible, reacts with a blaze of anger. Only Osama’s timely intervention saves Kashaf from Zaroon’s fists! 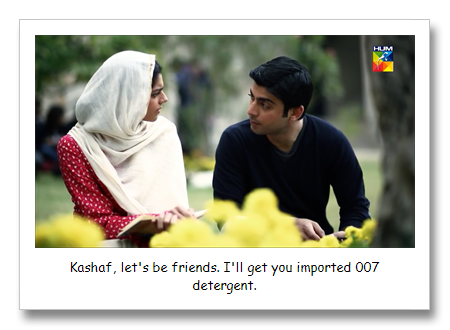 It is soon time to leave college, and our hero and heroine part on terms of mutual dislike, hoping never to see each other. Life moves on. Zaroon enters the Pakistani foreign service and bows to family pressure and gets engaged to Asmara. The engagement soon breaks down over his efforts to control all aspects of Asmara’s life – she is expected to dress according to his wishes, never socialise with her guy friends, and indeed, never go contrary to his wishes. His wife won’t be an independent woman like his mother or sister, or wear the kind of clothes that  are “an open invitation to harassment”! No “liberated female” nonsense for him!! 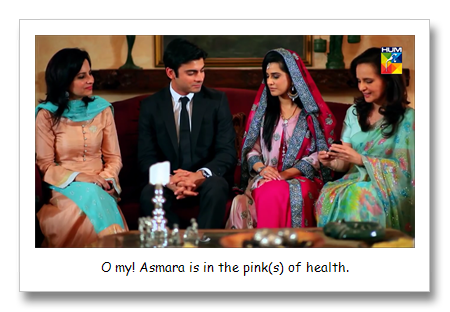 A couple of years after college, Zaroon runs into Kashaf again – she is now a member of Pakistan’s elite Superior Civil Service. While the years have softened his dislike of Kashaf into reluctant respect for her steadfast character, she hasn’t changed her opinion of him one iota. So it makes things very awkward when he decides that Kashaf is the only woman for him. He is the last man on earth she would ever consider marrying! He manages to convince his family and even hers, but it takes a great deal to convince her. For once, though, he manages to convince her of his sincere admiration for her and his strong desire to marry her – probably because this time he is sincere in seeking her good opinion.

So, the wedding bells ring out and Kashaf and Zaroon embark on their married life. Their path to marital bliss is not smooth. Kashaf doesn’t quite believe that she can be happy and truly loved. In trying to maintain her independence, she often shuts Zaroon out of her life, refusing to share her problems and thoughts with him. Zaroon, for his part, expects a traditional “allah-miyan ki gaye” (Holy cow!) kind of wife – one who not only bows to his will, but also puts up with his tantrums and spoils him! How do these two finally get to their happily-ever-after? Does Zaroon ever grow out of his man-child-ness? Can Kashaf learn to be happy? More importantly, will she get brighter make-up and will the dupatta on her head come off? 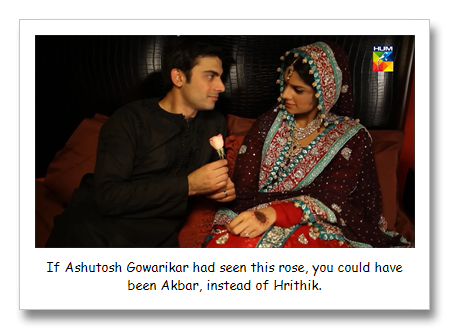 There is a lot to like in the series. From the excellent dialogues and screenplay, the superb acting, the (mostly) realistic sets, and the believable drama, the series gets so much right. I was sucked into the story from the beginning, and soon started to take a personal interest in the characters’ lives! There is Kashaf and her beleaguered Mom and sisters. I wanted them to succeed in life and get even with their father who abandoned them for a second family. I so wanted their father to live with eternal regret for every transgression against the daughters and the first wife. And I wanted Zaroon to be brought down several pegs – he fancied himself way too much and needed the full Elizabeth Bennett treatment. The script writer(s) agreed with me and Zaroon did come in for quite a bit of verbal pounding! In fact, most of what I wished for, came to pass.

I loved that Kashaf was not the typical passive-aggressive woman that passes for a “strong character” in popular media. She has strong opinions that she doesn’t hesitate to express, she confronts situations head-on, and never backs down from a confrontation. And while she may have complexes about her beauty, wealth and lovability, she is perfectly confident about her intelligence and capability. That said, she does come over as a bit abrasive at times – like when Zaroon offered her a lift home after a college party and she was horrendously rude to him even though she accepted his help!

My biggest gripe with the series was its leading man – I wish Zaroon was a nicer man, and not such a sexist prig! While Kashaf often wipes the floor with him at university, and all his friends and family acknowledge his narrow-mindedness, he still gets to eat his cake and have it, too. He gets his ideal virginal bride, who is intelligent and fairly independent, but also very domesticated and well schooled in “caring for her husband”! And what does he ever do for her? Well he lounges around looking impossibly decorative and sometimes mouths romantic nonsense at Kashaf. Unlike Mr. Darcy, he learns nothing and will always be a spoilt man-child. But Kashaf seems happy enough, so who am I to object? 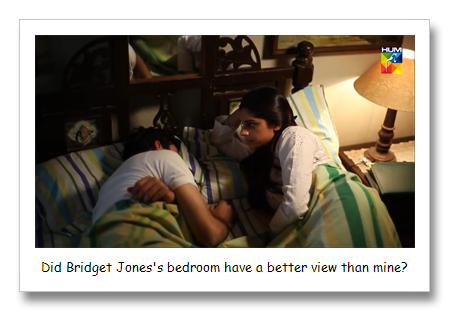 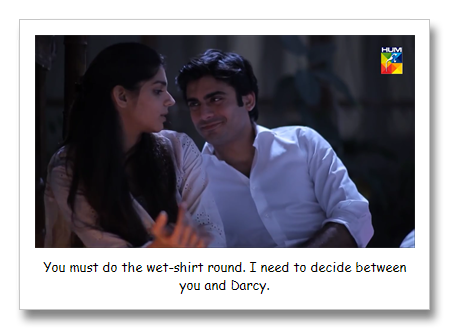 The series did strike me as pretty regressive, particularly in its take on gender issues. But I still find it compelling viewing. Have you seen it? What do you think?

This entry was posted on Saturday, April 30th, 2016 at 8:51 am and is filed under TV series. You can follow any responses to this entry through the RSS 2.0 feed. You can leave a response, or trackback from your own site.