I’ve always been keen on watching foreign films set in India, though I’ve seldom liked them! They’re either too Orientalist or too boring – frequently both. In spite of that, it’s hard to resist the pull of seeing India through an alien lens. Bhowani Junction was one of the first set-in-India English language films that I ever saw. I’ve compared every subsequent film of this kind against it, and found it wanting! It’s not because Bhowani Junction eschews Orientalism/Colonialism altogether, but because these are kept in fairly good check, and the fast-paced and interesting narrative keeps me too occupied to brood upon the flaws. 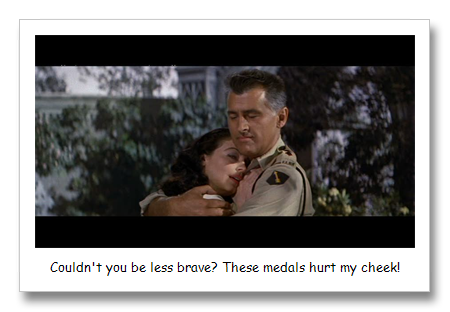 END_OF_DOCUMENT_TOKEN_TO_BE_REPLACED

Once upon a time in masala filmland, families/siblings were routinely torn asunder (usually in Kumbh Mela, accidents or by the machinations of the evil villain) and brought together years later through inevitable coincidence. Sadly, families always seem to stay together these days. Be that as it may, as a card carrying member of Bollywood’s families-torn-apart-and-re-united party, I was, naturally, always alert to the possibility that I have missing family out in this big bad world. But it was in blogland that I finally met my long-lost masala sisters – Anu (Conversations Over Chai) and Madhu (Dustedoff). Anu and Madhu found each other years ago. My masala sibling-ness took a while to manifest itself – Anu and I both lived in Bombay, Madhu and I both live(d) in Delhi, all three of us had (mostly) the same thoughts about movies/songs/actors/books. But when Anu and I watched the same movie (five years apart) and found ourselves making the same comments on the film, it was time to face up to the truth – we were bicchdi behne indeed! 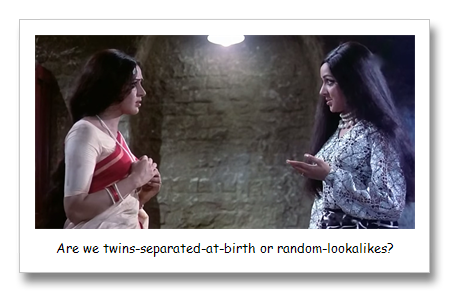 A re-union of masala sisters does not happen everyday. To celebrate this once-in-a-lifetime re-union, we decided to watch our favourite masala re-union stories. In order to spare you reading about the same movie thrice (of course, we all chose the same movie to review!) Anu decided to watch Yaadon Ki Baaraat (three brothers separated in childhood by an evil villain), Madhu went for Johnny Mera Naam (two separated brothers) and I settled for my favourite twin-sisters-separated-at-birth film.