I must admit that I have never outgrown Arabian nights tales with handsome princes and flying carpets, especially when the handsome prince happens to come in the form of young Kabir Bedi. So when I became aware of the existence of this film, I immediately turned to my trusted resource – youtube. Imagine my delight when I found the entire film on youtube, in a fairly watchable print! Naturally, I want you all to be aware of it, too! Nothing like a good old-fashioned fairy tale to while away the hours, or chase away the blues! So, here goes… 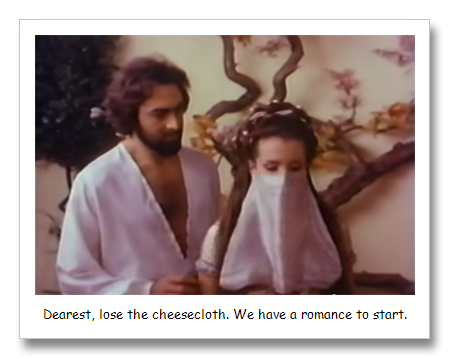 Prince Taj-el-Maluk (Kabir Bedi) of Zakar is grieving for his recently deceased father when Abu Bakar (Frank Finlay), the late king’s advisor arrives to bid him farewell. He is leaving on a holy pilgrimage and declines to stay on and advise Taj. However, before he goes, he advises the Prince to be careful of his Wazir, Jaudur (Terence Stamp). Jaudur arrives in the middle of their conversation and you can see that he looks creepy enough to be clearly evil – but Taj is surprised at Abu Bakar’s warning! (Taj clearly needs to watch more movies – he wouldn’t need warnings from wise men to recognise a VILLAIN!) 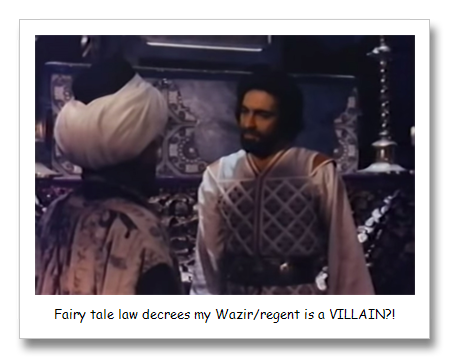 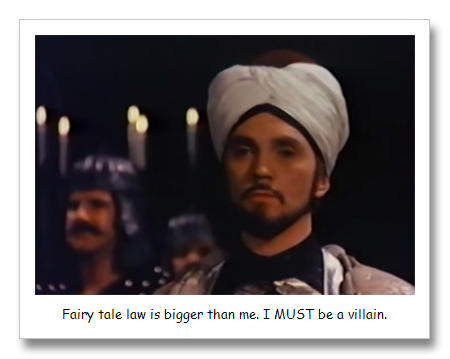 A while later, a prisoner is brought in to Jaudur’s room. When the man protests against the injustice of his arrest, Jaudur asks him to look into his eyes. Taj walks in on them just then. When the terrified man turns to the prince, asking to be saved from “the evil one”, one of Jaudur’s guards kills him with an arrow. Prince Taj is upset. Why kill the poor man? Jaudur assures him that it was only to protect His Highness – the man could be an assassin. While Taj’s back is turned, Jaudur even magic’s the dead man’s pouch into a deadly assassin’s knife, to prove his case. Unconvinced, but unable to undo the killing, Taj turns to leave. But Jaudur has an urgent matter to bring to the Prince’s attention: marriage! The Caliph of Baghdad has invited princes and kings to vie for the hand of his daughter, Princess Yasmin. Taj is not too keen, but Jaudur reminds him that his people need a Queen who will bring prosperity and power to the kingdom. The next day, the Prince and his entourage set out for Baghdad, to win the princess. 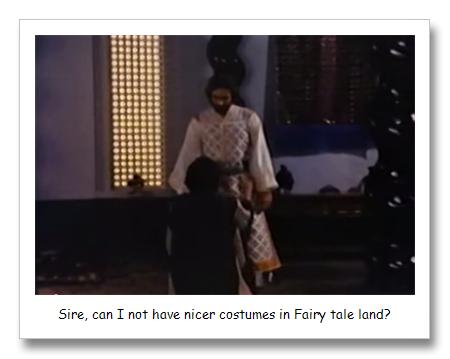 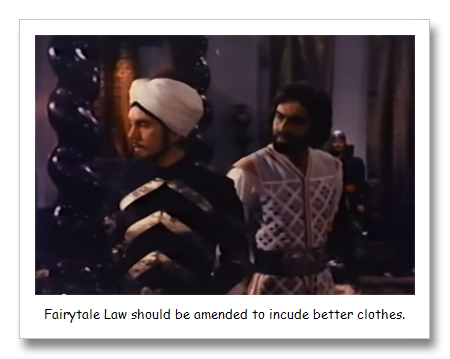 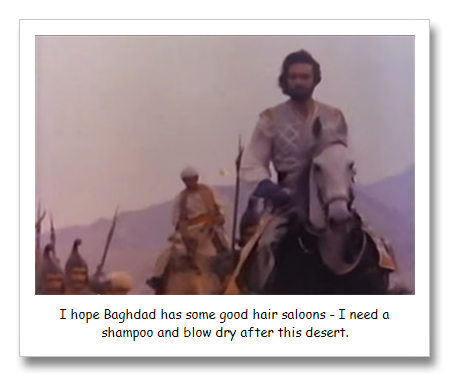 Cut to Baghdad where the Caliph (Peter Ustinov) is quoting the scriptures at his beloved daughter Yasmin (Pavla Ustinov), vainly trying to convince her to marry one of her suitors. But Yasmin can also quote the scriptures in her defence – she will marry for love or not at all. Daddy is proud of his daughter’s wit, but she must marry! His people need it!! She has rejected every royal suitor, and there are only three left – if she won’t select one, she must face the consequences. Perizadeh (Marina Vlady) the princess’s lady-in-waiting (or is she the Caliph’s concubine? We never find out…) persuades His Holiness to be patient. The Princess may yet fall for one of her suitors. (And we know who that suitor is!) 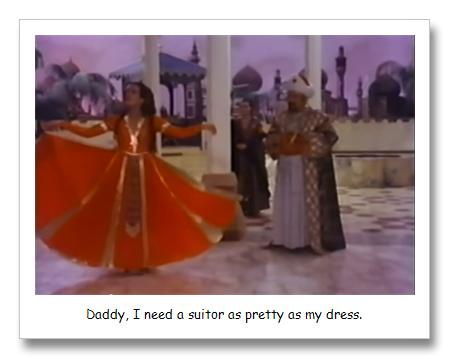 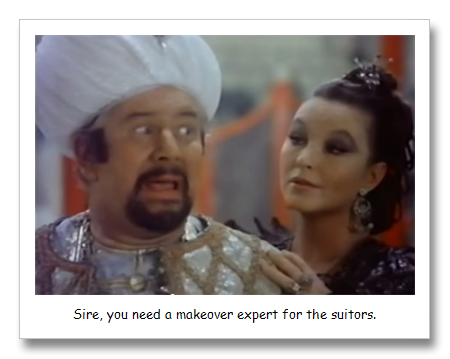 Back with Taj, we find that the Zakar royal party has made camp in an oasis. While the rest of his party enjoy food and music, Taj relaxes by the poolside. All is peaceful, all is bright, when out of the desert come a bunch of black-clad horsemen. Their attack is swift and brutal – they kill everybody in their path, while their leader exhorts his men to find the prince. Taj realises that his people are outnumbered and there is only one way to escape. He puts his royal seal on the corpse of a dead young man, and hides. The seal is discovered, and the attacking party retreat with the body of “the prince”. 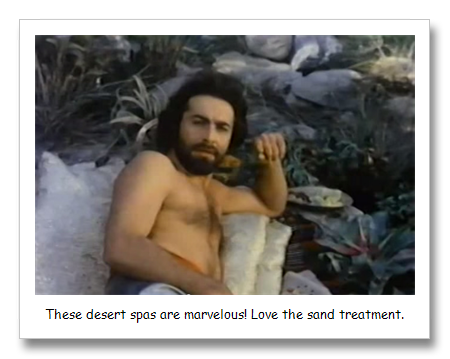 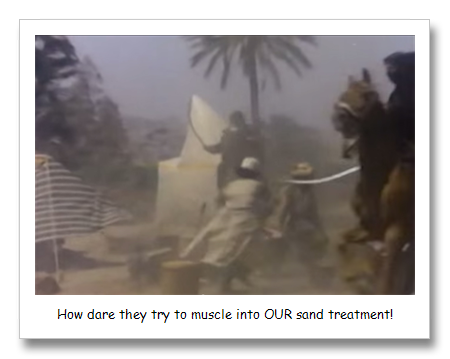 Taj decides to travel to Baghdad and seek help from the Caliph (So he is finally clued in to the villainy of Jaudur!). All of his party are either dead or gone, so he must make his way to Baghdad alone. It is a long journey through the desert and Taj is half mad with thirst and hunger when he finally gets to Baghdad. The thirst is soon quenched, but he has no money to buy food. So the heir to the throne of Zakar is reduced to stealing food, and being chased through the streets of Baghdad as a common thief! On the run from the police, he chances upon the kindly thief and trickster, Hasan (Roddy McDowell). 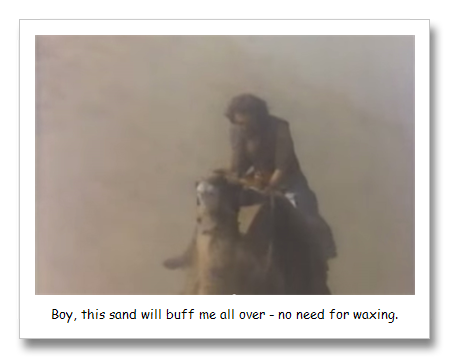 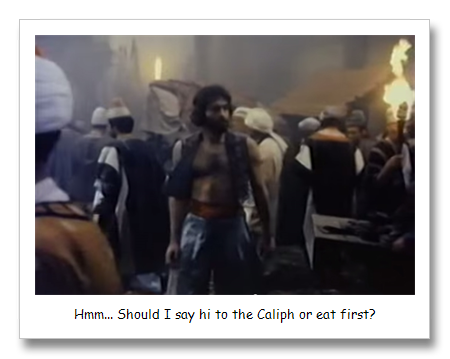 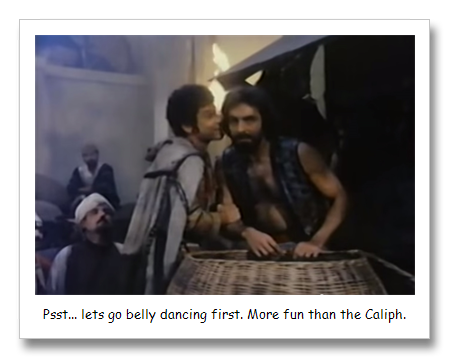 Hasan saves Taj from the police in the spirit of one thief helping another. So he is understandably sceptical when Taj reveals himself to be a royal personage, on the run from his evil Wazir. But he decides that if Taj really turns out to be a royal, he might as well help him, and reap the rewards later. So he steals clothes fit for a prince (and his servant), and the two make their way to the court. 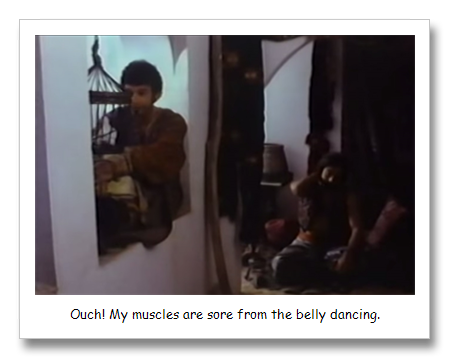 At the court, the princess and the Caliph are inspecting her suitors one by one. First comes the elderly Lalitaditya (Kenji Tanaki) of Mongolia, followed by the rotund Kanishka (Ahmed el Shanawi) of Kashmir – neither appeal to the Caliph or his daughter. When Taj, resplendent in his borrowed clothes, strides in to present himself to the Caliph, the latter thinks he finally has a match for his daughter. Naturally, the princess agrees! Just when everybody thinks their troubles are over, the arrival of “King” Jaudur of Zakar is announced. 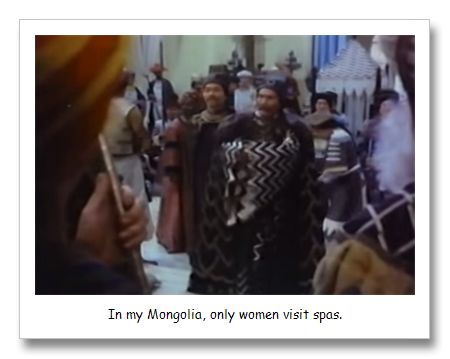 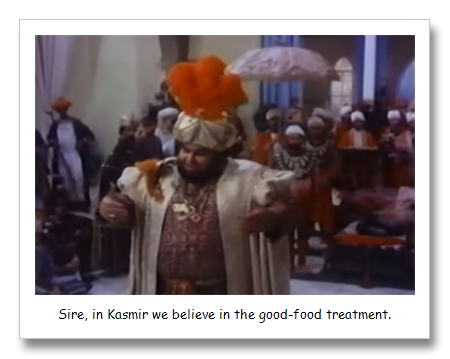 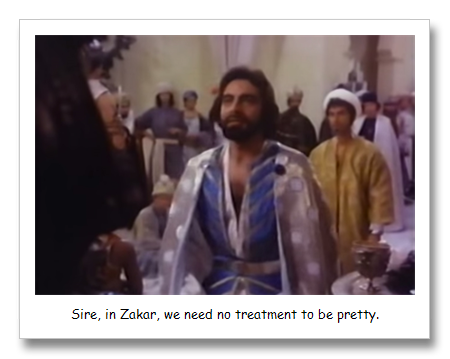 Jaudur comes in on a flying carpet and declares himself a suitor for the princess’s hand. The angry Taj confronts his enemy, who effects not to know him. Prince Taj, claims Jaudur, was killed by bandits in the desert. Time for a splendid sword fight. Whilst fighting out of sight of the court, Taj discovers that his enemy is indestructible! Jaudur reveals his secret – his soul is kept safely hidden, far away. So he cannot be destroyed. The defeated Taj is brought back to the court, with Jaudur commanding his guards to kill the insolent usurper. Princess Yasmin appeals to the Caliph to spare her betrothed! She will marry none other than Prince Taj. 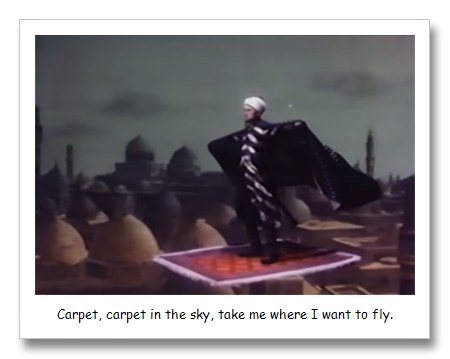 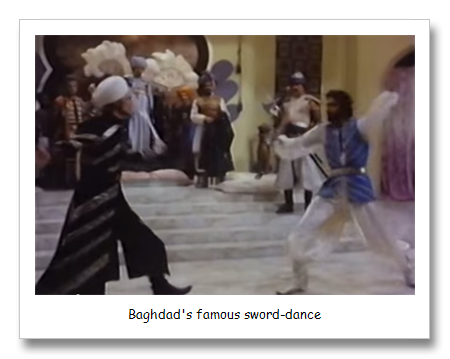 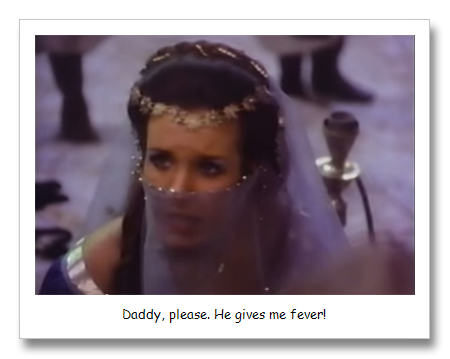 The Caliph is torn. Is Taj really who he says he is? What about Jaudur? His magical powers are scary and Baghdad must not anger him. But how to disappoint his daughter who has set her heart on Taj? He announces that he must consult with his advisors. The court will reconvene in a few hours. In the meantime, Prince Taj will be kept under close guard in the palace. 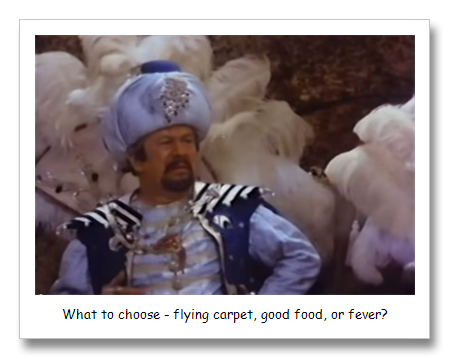 The Caliph calls for Perizadeh and tells her that Yasmin must agree to marry Jaudur. Baghdad’s existence depends upon it. Perizadeh shows him a way to buy more time and eliminate all but one of the suitors. She reminds him that the prophet Al Jabbar predicted at Yasmin’s birth that the princess would marry the worthiest of all suitors. Perhaps His Holiness could set the suitors some difficult task that could help eliminate the unworthy suitors? The Caliph is delighted. Back at court, he assembles all the suitors and gives them three months to find the most valuable thing on earth. That’ll buy him some time to look for a solution. 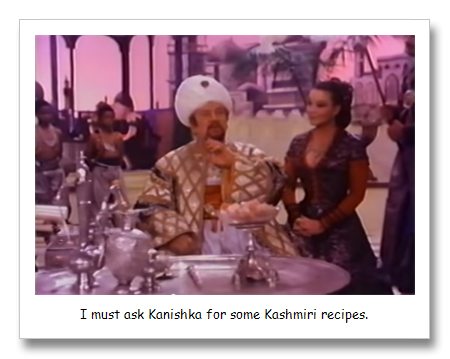 So the suitors set out on their tasks. While Jaudur has all of Zakar’s resources and his own magical powers to aid him, Taj has something infinitely more important – Yasmin’s heart and Perizadeh’s help! So, Taj and Hasan, with some help from Perizadeh, set out on a quest to find the most valuable thing on earth. Will Taj succeed in defeating the evil Jaudur? As this is a typical fairy tale, I don’t think I am spoiling the story by saying yes to that question. The more important questions here are – will Taj get into more swashbuckling battles? Will he get to show off his bare chest and rippling muscles any more? I know that people interested in such purely academic matters will definitely like to do their research by watching this film! 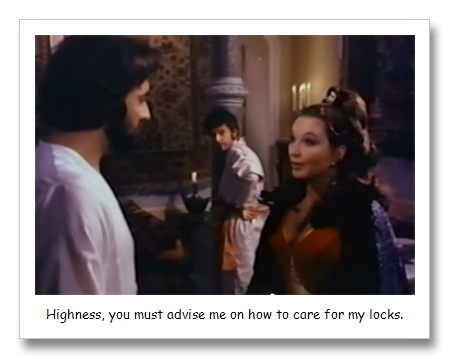 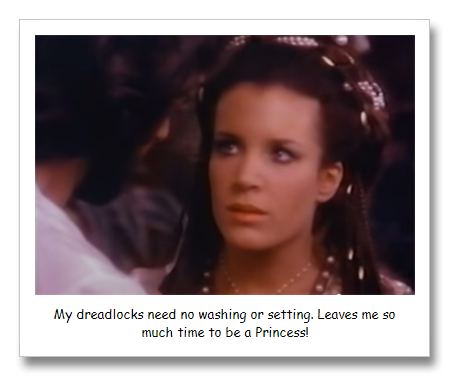 The plot is no more than a predictable fairy tale that all of us have read during childhood in some form or the other. The special effects, the sets and the costumes suggest that this was not a big budget production. But the story is told fairly well and moves at a fast pace. I particularly enjoyed Peter Ustinov’s performance as the comical, indulgent, trying-to-be autocratic, Caliph, and Marina Vlady’s sparkling Perizadeh. And of course, Kabir Bedi’s restrained swashbuckling. Roddy McDowell, the eponymous thief of Baghdad, gets some witty dialogues and saves the day at the end, but did not really leave a big impression on me. I would have preferred Princess Yasmin to be played by an actress with some acting skills, and the rest of the cast to be a little less hammy, but I can live with that for a cute fairy tale. Those of you still interested in Arabian nights fantasies (or academic research on hunky leading men), do check it out. 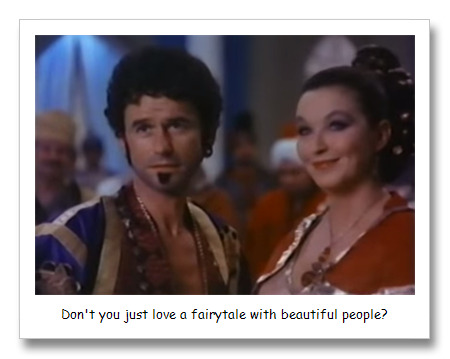